Showing posts from September, 2018
Show all

Sisterly Gifts & Judging a Book By Its Cover 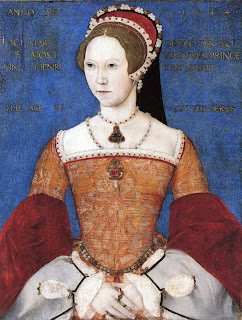 We're talking about some interesting tidbits I stumbled across with gifts exchanged between Bloody Mary and Elizabeth Tudor on the HHHistory blog. Here's a preview of the article.    Mary and Elizabeth Tudor are a fascinating pair of sisters. Same father, but rival mothers and seventeen years apart, it is surprising how affectionate the two were throughout most of their lives. One of the main ways that the sisters expressed their affection was through gifts exchanged. We can learn a lot about their situation and relationship from each of these.  Mary, as the elder sister, often sent Elizabeth spending money and cloth for making clothes since King Henry often neglected attention to such details. She also gave Elizabeth many pieces of jewelry, some of these pieces can be found in museums today. Her gift giving became so much of a custom, that when the relationship between Mary and Elizabeth turned hostile, Mary’s councilors told her she should send Elizabeth a
Post a Comment
Read more
More posts