Showing posts from June, 2015
Show all

The Birthing Room of Freedom 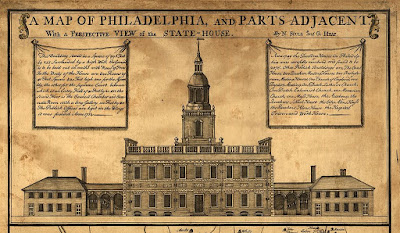 Today I'm blogging over at Stitches Thru Time about Independence Hall, the place where liberty for the United States of America was born. I'm also offering a giveaway on the blog this week for an autographed paperback of the Complete Declaration of Independence Anthology!  With Independence Day coming up this weekend, I thought I would share a few interesting tidbits about the place where it all began. The Pennsylvania State House, now known as Independence Hall is where America's freedom was born. The vital debates, the drafting of the documents, and ultimately the vote of in favor of independence took place in this historic building. Independence Hall is now listed a World Heritage site. Click Here to read the rest and enter the giveaway!
Post a Comment
Read more

This Day in Christian History: The Marraige of a Monk and a Nun 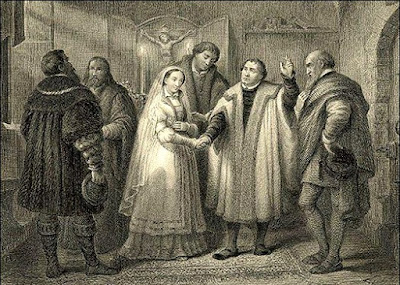 This Day in Christian History: June 13 June 13, 1525: Martin Luther marries Katharina von Bora Wedding of Martin Luther and Katharina von Bora Sometime around 1523, Martin Luther helped to rescue a group of nuns from a monastery. He endeavored to free the nuns from the Catholic order and find suitable homes for each. Among this group of nuns was Katharina von Bora. Though she had many suitors, none were to her liking, and Martin had a difficult time finding suitable arrangements for her. But in 1525, he finally found a home for her. His own. Thus on June 13, 1525, an ex-monk married an ex-nun. Martin was 42, and Katharina was 26. Their happy marriage of 21 years brought them six children. Katharina stood by Martin's side through many difficult times. Despite her being much younger than he, she died only six years after him. Here's another great post on the marriage of Martin Luther.
Post a Comment
Read more

This Day in Christian History: First Hanging of the Salem Witch Trails

This Day in Christian History June 10 June 10, 1692: Hanging of Bridgett Bishop Bridgett Bishop The summer of 1692 was a dark one in the province of Massachusetts. Started by the gossip and allegations of a few young girls, the Salem Witch Trials has gone down in history as an example of perverted justice. When Bridgett Bishop was accused of witchcraft in April of 1692, it was not the first time such an accusation had been made. After being widowed once, Bridgett  married Thomas Oliver, and it was no secret that their marriage was less than happy. They'd been publicly shamed for fighting more than once. She was accused of witchcraft in 1680, but she posted bond and nothing more came of it. Five girls accused Bridgett of witchcraft again in 1692. They claimed that she had cast spells upon them and tormented them. A trial was held, and she was sentenced to death. Bridgett became the first to be hanged for witchcraft during what has come to be known as the Salem Witch Tr
Post a Comment
Read more

This Day in Christian History: Death of St. Columba

This Day in Christian History: June 9 June 9, 597: Death of St. Columba Saint Columba was born in Ireland in 521. On his father's side, he was the descendant of a High Irish King. His mother was the sister of Saint Martin. He is best known for his missionary work in Scotland. After studying under many well-known church leaders, Columba crossed over to Scotland with 12 of his followers and founded a church in Iona. He is credited with being the leading figure to introduce and spread the Christian faith in Scotland. Columba had many miracles occur during his ministry. Once, he was attempting to evangelize one of the Scottish towns when they threw him out of the city, closed the gates, and tried to drown out his preaching with music. His voice miraculously raised above the instruments and was heard to the entire crowd. Then the gates came open, so he walked in and won many converts to Christ. He died in Iona at the age of 77 on June 9, 597. According to the Catholic encycl
Post a Comment
Read more

This Day in Christian History: June 1 June 1, 597: Saxon King Ethelbert is baptized Sculpture of Ethelbert of Kent Ethelbert of Kent was the third king to hold rule over the Anglo-Saxon kingdoms. He had married Bertha, the Christian daughter of the king of the Franks to build an alliance, but that may have had an influence in him becoming the first English king to convert to Christianity. The Pope sent Augustine as a missionary to Kent in 597. Shortly following his arrival, Ethelbert converted to Christianity and was baptized. The exact date of Ethelbert's conversion in unknown, but tradition holds it to be around the first of June, the summer after Augustine arrived in Kent. Ethelbert's conversion was what opened the door for the rapid spread of Christianity among the Angles and Saxons.
Post a Comment
Read more
More posts