Showing posts from March, 2017
Show all

You are invited to join us tomorrow, Friday, March 24th for a Facebook party to celebrate Easter with 5 Christian authors! There will be great prizes, trivia, games and much more, so be sure to join the fun! Christian Fiction Books for Easter Facebook Party. Meet the authors, learn about their stories, and have a chance to win free books and prizes. What better way to celebrate Easter? Here are the list of authors and when they'll be at the party: (all times Eastern)   6:00 pm Tamera Lynn Kraft 6:30 pm Jericha Kingston 7:00 pm Joan Leotta 7:30 pm Darlene Franklin 8:00 pm Wanda Porter 8:30 pm Amber Schamel One of the prizes we'll be giving away is a Holy Land Gift Set! https://www.facebook.com/events/604957236373263/
Post a Comment
Read more 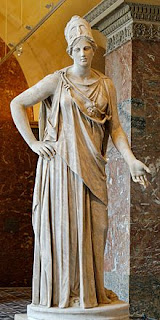 Today we're continuing our exploration of sisters in history. If you missed last month's post on Leah and Rachel, you can find it here . Athena Athena (known as Minerva to the Romans) and Artemis (Diana) were the mythical daughters of Zeus in Greek Mythology. While these two figures are either legends stretched to extraordinary proportions or complete products of imagination, they did affect history, as we will see. Athena , considered the goddess of wisdom, handicraft, and war, was the principle deity of the Greek Capital of Athens. She is best known for the story of her...ahem...unusual birth. As the story goes, her father Zeus swallowed her mother after she became pregnant for fear of her bearing a son that would threaten his reign. Afterward, he developed such a horrible headache that he begged a friend to split his skull with an ax to relieve the pressure. When his friend obliged, Athena sprang full-grown, wearing weapons and armor, from the slit in hi
1 comment
Read more
More posts